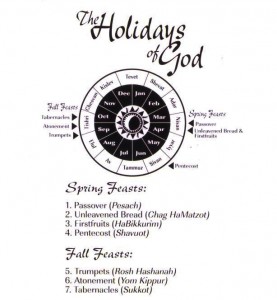 Many of us have seen all too clearly that sincere followers of Christ have honest disagreements about the interpretation of Bible prophecy.

While agreeing that Jesus, as Israel’s Messiah, has already fulfilled many patterns, and some clear predictions, of the Old Testament, we are not as likely to see eye to eye about whether predictions about Israel’s last days have been fulfilled spiritually and completely in the Church.

Since we are now into the Fall cycle of Israel’s Rosh Hashanah, (Sept 29-30)  Yom Kippur/Day of Atonement (Oct 8) and the seven day Feast of Tabernacles (begins on October 13), let’s talk once again about whether these holidays have more than spiritual and historical significance.

Writing about 500 years before Christ, the prophet Zechariah makes this prediction: “And it shall come to pass that everyone who is left of all the nations which came against Jerusalem shall go up from year to year to worship the King, the LORD of hosts, and to keep the Feast of Tabernacles (Zechariah 14:16).

Zechariah earlier talks about how the Lord himself will blow the horn (lit. shofar/rams horrn) (Zech 9:14), fighting for Israel, as the nations of the world come against her (Zech 12:1-3). Zechariah also wrote that the Lord will give his people a spirit of repentance—as they look with inexpressible grief at the one “they have pierced” (Zechariah 12:10).

Some therefore believe that the Fall Feasts of Israel are fulfilled in Zechariah’s vision of the last days.

Others are convinced that  because the Spring Feasts (Passover through Pentecost) were fulfilled in Christ, that we now have reason to see the Fall feasts as being spiritually fulfilled in the church.

At this point I’m convinced that there is truth (and plenty of over and under statement) on both sides. The church, through Israel’s Messiah, has inherited a place in the faith of Abraham (Gal :14) and God’s promises to him (i.e. to become a blessing to all of the nations of the world (Gen 12:1-3). In that sense followers of Christ are called to rise above nationalistic alignments– and to be for the people of all nations, without turning a blind eye to what the prophets have said about the injustices of Israel, or any nation.

I also believe, however, that to do justice to large portions of the prophets (which speak specifically about Jerusalem and the nations “in the last days)” we need to allow for a future that is in keeping with what the Apostle Paul writes in his letter to the Romans. (Rom 11:25-26)

I don’t say this to start or continue a bitter argument. Our disagreements do not keep us from looking for the promised return of Christ (maybe today/certainly in the future) (John 14:1-3); (Acts 1:9-11). So let’s not ignore what God has said through his prophets—nor fight about their interpretation.

Gracious disagreement can be healthy, appropriate, and energizing. But let’s also remember that far too many of our young people (and older) want nothing to do with vast sections of the Bible (prophecy) because they have seen too many of us say far more than we know, with far less love than is always called for.

« Previous: Backstory for Israel’s Fall Holidays Next: What Matters in the End!? »
Vote on whether you think this post is something you'll be thinking about:
45 Comments »